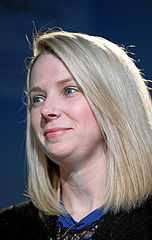 People are speculating right and left about what Microsoft should do. Here’s a thought.

Marissa Mayer obviously felt dissed by Google and had no plans to just lay down and play dead. She’s doing a great job at Yahoo from what I hear from every friend who works at Yahoo.

However, Yahoo does not have the power and resources to actually compete with Google. Now if Microsoft were to buy Yahoo and name Marissa CEO? All of a sudden, you have a company poised to really give Google a run for its money.

I’m sure she’d be chomping at the bit to prove to Larry Page that he made a blunder by reducing her power at Google. As a bonus, the tech media would have the ready made comparison to how Steve Jobs sold NeXT to Apple, became CEO and transformed Apple.

I would love to see this happen. Even if she didn’t succeed in besting Google, the result would be interesting to watch.

What do you all think?

Imagine if The Washington Post came bundled with Amazon Prime?

Prime has an estimated 10 million members. Providing a Post subscription would probably sell more Prime memberships. Going by numbers I’ve seen quoted about the NYTimes (see http://www.businessinsider.com/new-york-times-print-versus-online-2011-5 ), a print subscriber is worth ~$385 per year in advertising alone.

I would assume that the ~$385 in additional advertising Amazon could sell, would cover the cost of sending every Prime Subscriber a “free” copy of WaPo.

Why would that be attractive to Bezos?
Don’t forget, Amazon is working very hard on improving the speed of delivery to the home and bringing down delivery costs is a byproduct of scale. If they’re already coming to your house every day, then delivering another product quickly at the same time, can only improve margins.

Of course, a big question comes up. Is this feasible considering Bezos bought WaPo personally? I don’t know.