People are speculating right and left about what Microsoft should do. Here’s a thought.

Marissa Mayer obviously felt dissed by Google and had no plans to just lay down and play dead. She’s doing a great job at Yahoo from what I hear from every friend who works at Yahoo.

However, Yahoo does not have the power and resources to actually compete with Google. Now if Microsoft were to buy Yahoo and name Marissa CEO? All of a sudden, you have a company poised to really give Google a run for its money.

I’m sure she’d be chomping at the bit to prove to Larry Page that he made a blunder by reducing her power at Google. As a bonus, the tech media would have the ready made comparison to how Steve Jobs sold NeXT to Apple, became CEO and transformed Apple.

I would love to see this happen. Even if she didn’t succeed in besting Google, the result would be interesting to watch.

What do you all think?

Imagine if The Washington Post came bundled with Amazon Prime?

Prime has an estimated 10 million members. Providing a Post subscription would probably sell more Prime memberships. Going by numbers I’ve seen quoted about the NYTimes (see http://www.businessinsider.com/new-york-times-print-versus-online-2011-5 ), a print subscriber is worth ~$385 per year in advertising alone.

I would assume that the ~$385 in additional advertising Amazon could sell, would cover the cost of sending every Prime Subscriber a “free” copy of WaPo.

Why would that be attractive to Bezos?
Don’t forget, Amazon is working very hard on improving the speed of delivery to the home and bringing down delivery costs is a byproduct of scale. If they’re already coming to your house every day, then delivering another product quickly at the same time, can only improve margins.

Of course, a big question comes up. Is this feasible considering Bezos bought WaPo personally? I don’t know.

Remembering my Dad on his birthday 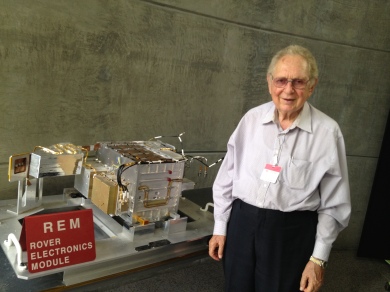 Today my Dad would have been 88. Before I head to the cemetery to pay him a birthday visit, I thought I’d share a few brief words.

Although I haven’t been as mentally present in this year’s preparations for Global Accessibility Awareness Day, I am humbled and proud to see how people around the world are working on bringing awareness of accessibility to the builders, the people behind the technology we use today. Awareness is the first step and we have not fully taken this step yet. We have lots of work to do.

#GAAD would not exist today if not for the frustration of seeing my Dad try to deal with inaccessible banking sites. I was so happy he was able to attend the first Accessibility Camp LA. Although he enjoyed it a lot, in all honesty, that is where I first sensed something was up with him physically. What I didn’t know was that less than a mere four months later, he would be gone.

My Father’s greatest regret at losing his father in the concentration camps, at what is now my age, is that my Grandfather never knew of the existence of the extragalactic universe.

From Google Glass, to 3D printers, to every new science story that comes out, I miss discussing it with my Dad. I wonder when the next massive discovery in the same magnitude of the extra galactic universe will come out. I have mixed emotions about discovering what’s next, because the joy was in sharing it with someone special.

It is hard to understand that my Dad is gone and now it’s all memories. I’m heartbroken. I really miss him. Happy Birthday Dad.

Don’t miss Accessibility Camp LA On October 20th. Details can be found here. As a side note, Laura Legendary did a nice interview with Jennison and me about the event.

Getting your talk accepted at Semtech, Zendcon & conferences in general. Redux.

I’ve already written a post about how to get accepted at a major conference. But since I was invited back to be on the advisory boards of Semtech and Zendcon again, why not add a couple more insights…

That’s it for now…

Cal Evans, a PHP luminary, is interviewing me today for his Voices of the ElePHPant podcast. We will be discussing among other things, how the GAAD event was. As I’m writing some notes about it, I thought it time to discuss reaction to the event and what’s next.

Where to from here?

Although GAAD is an important day, one day a year isn’t enough to make the kind of difference we need. Accessibility needs to be at the forefront of developers’ and designers’ minds. And the only way to achieve this is to have them aware of it on a daily basis. This is my new “mission”.

You can’t achieve your goals if you don’t define them, so here are the goals:

Another positive development that came out of GAAD, was the realization that the Semantic Web community and the Accessibility community are natural allies that should be working together (but aren’t, yet!). For those who are unaware, I’m pretty involved in the Semantic Web. A co-organizer of LASemWeb and 2-time member of the advisory board of Semtech.

Eric Franzon wrote an excellent article about GAAD on SemanticWeb.com that explains it pretty well. To boil it down, at TED, Tim Berners Lee, inventor of the World Wide Web, made an impassioned pitch for bringing to life the second part of Tim’s vision for the web. Getting computers to talk to other computers. This isn’t a trivial problem to solve. Many don’t even see the point. It seems like the Semweb community was looking for a good use case. Well now you have it. If a computer can understand a web page, then a screen reader can share that device with people who need to use a different type of browser to surf the web.

So Jennison and I are mulling the idea of a joint TED talk. To discuss how GAAD came about. And how we can join Tim’s call for linked data now along with Global Accessibility Now.

Additionally, it looks likely that there will be a GAAD discussion at Semtech. I’m also on the advisory board of Zendcon and Kevin Schroeder has said that they would consider a talk on this topic. And one of the best speakers I know, Brian Sletten, is adding an accessibility talk to his repertoire.

Yesterday I started a new Meetup. Santa Monica Techcersizers. I know. The name sucks. The wording on the page is bad. I’m old. I’m fat. I’ve been told this is crazy. Daily is too often. It’s too early. This won’t succeed.

You know what? Who cares? I woke up at 7am. Knowing I’d rollerblade alone. But just in case someone showed up, I had to be there. Not for myself. Not to get in shape. Not because it was easy. But because I owe it to whoever else might by chance show up.

So I rollerbladed alone. About 8 miles. From here to here. And back. I will probably rollerblade alone again tomorrow. And the day after.

Who cares? In one month I’ll be a month older. And a bit thinner. And I won’t be rollerblading alone. Because one of you reading this will join me.

You’re in the tech business. You live around Santa Monica. The best place in the world to exercise. You will meet like-minded people. You will improve your health. This will be good for mind, body, spirit and yes, even wallet.

The only things stopping you are excuses.

So see you at SaMoTech Beach one of these days. I won’t be rollerblading alone forever.